Specifies the address of memory in the word to be written from or read into the MBR.

Employed to hold temporarily the right- hand instruction from a word in memory.
.

Contains the address of the next instruction-pair to be fetched from memory.

Employed to hold temporarily operands and results of ALU operations. For example, the result of multiplying two 40-bit numbers is an 80-bit number; the most significant 40 bits are stored in the AC and the least significant in the MQ.

Controls the operation of the computer and performs its data processing functions; often simply referred to as processor.

Moves data between the computer and its external environment. 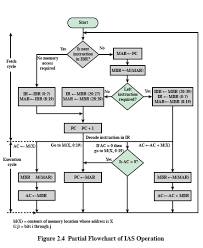 The control circuitry interprets the Opcode & executes the instruction by sending out the appropriate control signals to cause data to be moved or an operation to be performed by the ALU.

The memory of IAS consists of 1000 storage locations called words of 40 binary digits each. Both data & instructin are stored there, Number are represented in binary form. 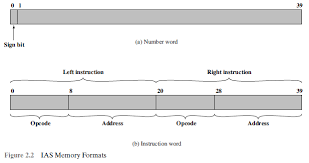 Each number is represented by a sign bit and a 39 bit value. A word may also contain 20 bit instruction consisting of an 8 bit operation code(opcode) specifying the operation to be performed and 12 bit address designing one of the words in memory (numbered from 0 to 999)

IAS computer had a total of 21 instruction that can be grouped as follows.

The control unit executes instruction in sequence from memory. There sequence can be changed by a branch instruction which facilitates repetitive operations.

Branch can be made dependent on a condition thus allowing decision part.

It comprises operation performed by ALU

It permits address to be computed in ALU and then inserted into instruction stored in memory.

4.) The difference between computer Organization and Computer Architecture:-

- Deals with all physical components of computer systems that interacts with each other to perform various functionalities.
- The lower level of computer organization is known as micro- architecture which is more detailed and concrete.
- Examples of Organizational attributes includes Hardware details transparent to the programmer such as control signal and peripheral.

- Refers as a set of attributes of a system as seen by programmer
- Examples of the Architectural attributes include the instruction set, the no of bits used to represent the data types, Input Output mechanism and technique for addressing memories.

The number of components fitted into a standard size IC represents its integration scale, in other words it’s a density of components. It is classified as follows:
 SSI – Small Scale Integration
It have less than 100 components (about 10 gates).

MSI – Medium Scale Integration
It contains less than 500 components or have more than 10 but less than 100 gates.

Download the pdf to get all the unit wise notes.
Try to save your valueable time!